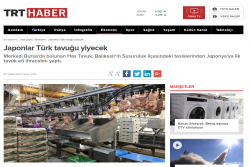 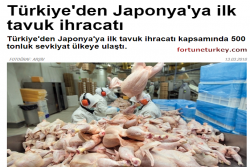 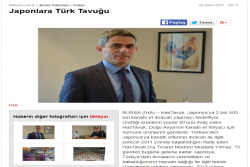 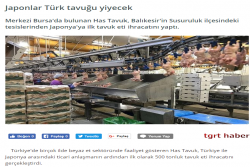 Has Tavuk, active in white meat sector in many provinces throughout Turkey, have carried their first 500 tons of chicken export out following the trade agreement between Turkey and Japan.

At the press conference that the firm held in Susurluk Facilities, the General Director of Has Tavuk Şahin Aydemir presented a Turkish flag to Soto Sunaga, the Sumitoma Corporation Director of Turkey. Kissing the Turkish flag, Sunaga also gifted Aydemir with a Japanese flag.

After that, making a statement in front of the container prepared to be sent to Japan, Aydemir stated that the Japanese sector gives much importance to quality in white meat sector. Aydemir said, "we are all passing through sensitive days as a country. Our responsibility is to make our country's economic war in a national unison. In this concept, it gives us happiness and pride to run at new goals with new sails in new horizons."

"Having a place in a market like the Japanese market which is one of the biggest importing markets in terms of quality and selectiveness and being the first exporting firm in this area gives us, Has tavuk, pride. They have a 600 tons of import demand in 2 years and we will work to meet that. In this scope, at the first stage we will start with a 500 tons of delivery and try to achieve this goal. The works that were carried out by Turkish Government with the Japanese counterpart have resulted 2 months ago and both governments have reached an agreement on white meat and agricultural products importation. After this agreement, we are are carrying out the first export today. As Has tavuk we have 45 million dollars worth of import to 26 countries in 2017. In 2018, this number will reach 100 million dollars with Sumitoma Corporation and much greater values in the following years. Because we think our strong friends and partners will take us there."

Turkey is the first for us."

Sumitoma Corporation Director of Turkey Soto Sunaga stated that they made in various countries for white meat importation and they opted Turkey after many eliminations.

Sunaga, having stated that they had negotiated with 10 firms in Turkey, said:

"As Sumitoma Corporation we are entering a new market of rivalry. With these products we are aim at the end users. In this matter, we are planning to realize all goals in Japanes market with Has Tavuk. Japanese market is one with many demands. For these demands, we are aiming to go over the 3 millions of dollars that is required with Has Tavuk. As Sumitoma Corporation we operate in Turkey, Istanbul for 35 years. We have investments in Tat canned foods and Tat tomato pastes. For new investments, we need to see the results of these investments. As a firm, we were importing white meat from Brazil, China and Thailand, Turkey is the first time for us. We have been active in Japan in the sector of white meat. We made many negotiations whith many countries but Turkey and Poland have offered the best opportunities to us in terms of "bird flu." As a result of negotiations, we started working with Has Tavuk. We made our final decision on Has Tavuk after negotiations with 10 different companies. Turkish white meat sector is on par with world standards. For this reason we took Turkish white meat products into the Japanese market."

After that, Aydemir and Sunaga waved and sent off the lorry loaded with the first container.